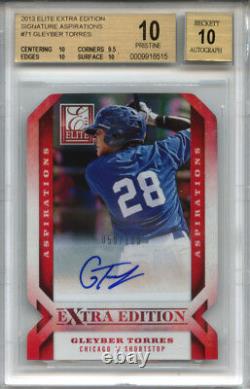 This autographed rookie card is Torres' earliest official professional signed baseball card from 2013, as part of the Panini Elite product. This card is serially numbered 050 out of 100 and is a die cut card. The die cut cards are nearly impossible to get any kind of gem mint grades, let alone the pristine 10 grade!! This card has THREE Pristine 10 subgrades.

Because of the fine condition of this card, this Torres autographed rookie card is ONE of 4 graded PRISTINE cards to date. There may not be any more PRISTINE graded versions this card at all due to the sensitive nature of these die cut edges. Torres followed up his successful 2018 rookie season with an even better 2019 season as a 22 year old. By the end of the 2019 season, Torres is often found batting in the heart of the Yankees lineup. He finished the 2019 season with a. 278 batting average, with 96 runs scored in 144 games, along with 152 hits, 90 RBI and an amazing 38 home runs as a middle infielder. Torres earned his second All Star game appearance as well.

If you've not locked in Torres cards and collectibles, now is the time before he puts up big numbers in 2021 and help the Yankees win another pennant and perhaps the World Series. He may be the heir to The Captain, Derek Jeter.

This card has 3 PRISTINE sub grades and a GEM MINT fourth sub! This card has been professionally graded a BGS 10 (which is PRISTINE), the highest possible grade given out by Beckett Grading Services, one of the top two grading services in the sports card industry. Because Beckett and PSA are the top two 3rd party grading companies in the collectibles industry. Because if you want your card to appreciate in value, the condition of the card is very important. Having the card sealed in the case & it's condition graded allows you to easily sell/trade the card online. A portion of the proceeds from this listing will be sent to the world relief organization World Help. This water well will provide clean/usable water for a community of up to 1000 people! Thanks in advance for your contribution towards this cause.

One charity, World Help, drills and installs water wells that provide clean/usable water for villages of up to 1,000 people per location in Africa. You played a part in that! The other 5% will go to an orphanage call Nueva Esperanza Children's Home in Tijuana, Mexico. This orphanage cares for 30+ children and is run completely from donations from people. I have visited the orphanage 4 times over the past 10 years and it's a joy to see the children each time.

This item is in the category "Sports Mem, Cards & Fan Shop\Sports Trading Cards\Trading Card Singles". The seller is "dbbd_collectibles" and is located in this country: US. This item can be shipped to United States, Canada.